Running or walking with low intensity leads to a series of very important physiological changes that  reduce the chances of heart attacks and favor the functionality of our heart  . You should know that the risk of heart attack in untrained people is twice as high as in trained subjects. If you are not fit enough to run ... Don't worry! little by little you will acquire it, and in the meantime the slow trot will be your ally (jogging). It improves the overall efficiency of the body in all aspects, especially cardiovascular capacity, and also has a beneficial effect on major risk factors (2).

Performing these two basic forms of exercise contributes effectively to maintaining or reducing body weight, provided that a proper diet is followed. One of the most important factors in the development of obesity is inaction, much more than the diet itself. In general,  diligent practice of these activities  will provide you with a large number of benefits for the  cardiovascular  ,  respiratory  ,  motor  and  nervous systems  , partially reducing the effects of old age and favoring the psycho-affective balance.

Why do I feel good when walking and running?

When you do a race with minimal time and intensity, among other physical activities, you usually have an obvious sense of well-being that can last for several hours. This pleasant situation is due in part to the brain's secretion of substances such as endorphins or a group of hormones from a morphine-like composition produced and released to reduce severe pain, anxiety and even stress.

Very subjective information shows that post-workout well-being lasts up to six hours and is associated with a reduction in anxiety, depression and stress (1).

Differences and similarities between walking and running

Walking and running have a similar cyclic structure. The distance that exists between one support to another is called the walking step and the step between two supports when it comes to running, which is a natural extension of gait.

Walking is a physical activity that has less osteoarticular effect than running. The energy expenditure associated with body weight and exercise rhythm (among other factors) also varies. According to MacArdle and colleagues, walking about 5 miles per hour is more expensive than running. From a sports point of view, walking at this pace is not very effective. However, if we intend to increase energy costs, this is an advantage, as more physical work is done in less time. At low speeds, the cost is lower when walking than when running, but the energy consumption at 140 meters per minute is almost the same for both forms of movement (1).

The energy consumption of walking and running is different, it increases with increasing intensity or speed of movement, as we can see in the image below (1). 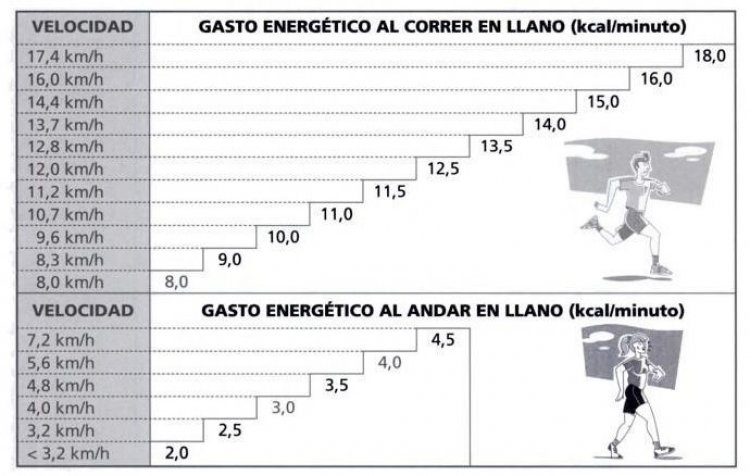 Advantages of walking and running

Why run or walk?

There are many benefits that these two forms of aerobic exercise,  walking and running, offer us  . Remember that it is important to maintain an  active life  and avoid a  sedentary lifestyle, as this will benefit your own health. Each of the two methods,  walking and running  , is suitable for improving our cardiovascular and respiratory systems directly. In addition, the fact that you diligently practice walking or running will release endorphins that directly affect our happiness, freeing us from the stress of everyday life.

How, when and why do carbohydrates turn into body fat?

How many vegetables and fruits should you eat each day?...

Is it important to have a sleep regime, how does sleep...

Amount of sugar per day