Over the years, there has been a lot of new information on this subject - as a result, gluten is no longer considered only in the context of weight loss and proper nutrition.

Statistics show that difficulties with the absorption of gluten are present in 0.2 - 6% of the population in different countries. At the same time, intolerance is manifested not only in the presence of celiac disease - gluten can provoke food allergies in people with irritable bowel syndrome.

Gluten - what is it?

Gluten is a class of proteins found in many cereals, especially wheat, barley and rye. Its content in wheat is more than 80% of the total protein. The Latin name  gluten  means "glue" - which is why gluten is also called "gluten".

The high gluten content of wheat flour is a key factor in how easily it mixes with water. In general, gluten sticks the dough together - the more of this protein in a particular type of grain, the easier it is to make a homogeneous mass from the flour of such a grain.

In addition, gluten can capture carbon dioxide. Makes the dough porous, which in combination with yeast provides airiness during baking. For the same reason, gluten increases the formation of gas in the stomach and can cause microinflammation.

There are several reasons for the body's inability to digest gluten. First, it is a genetic disease of celiac disease. Second, difficulties can occur as a result of a bacterial infection.

There is information that infection with the bacterium Pseudomonas aeruginosa interferes with the production of enzymes that help the body break down gluten. As a result, symptoms of intolerance may be observed.

Third, there is a link between the presence of irritable bowel syndrome and the inability to properly digest gluten  4  . In turn, the causes of IBS are not fully understood - it can be stress, infections or even improper diet.

Where is Gluten Found?

Gluten is a group of proteins found in grain starch. Keep in mind that the proteins from the gluten group are found exclusively in cereals - wheat, spelled, barley, rye, oats and spelled. Gluten does not contain rice,  buckwheat  ,  quinoa  , vegetables (including legumes) and fruits.

About 25% of the mass of wheat grain (and up to 80-85% of the total protein) falls on gliadins, prolamins and glutelins - different types of gluten. In this case, celiac disease is an acute allergic reaction exclusively to the protein glalin. In other cereals (especially  oatmeal  ) is less.

Specifically, oats contain avenins, a type of gluten protein that is extremely poorly digested by the human stomach. Interestingly, the official answer to the question "is there gluten in oatmeal?" Yes. However, it is this gluten that can practically not affect the body.

Use as an ingredient

In fact, gluten is one of the most flexible ingredients in the industrial food industry. When mixed with water, gluten forms a dense texture - which is important in the production of jellies, yogurts and sauces.

Under the name modified wheat starch, stabilizer and hydrolyzed protein, gluten can be found in foods that do not include wheat at all, such as sweet cottage cheese, baby fruit purees and chocolates.

Among other things, wheat products are used in the cosmetics industry. Small amounts of gluten can be found in powders, mascaras, lipsticks, toothpastes, shampoos and shower gels.

Although it is safe for most people, it can be irritating if you are allergic to gluten.

How does it affect the body? 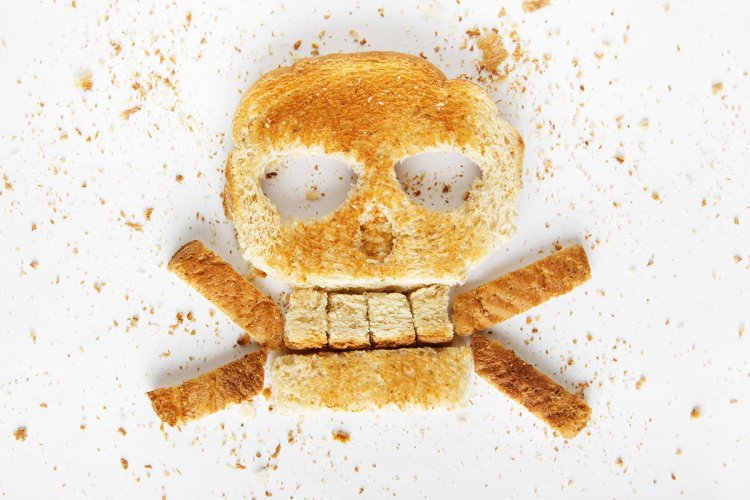 It is estimated that the average person consumes 10 to 40 grams of gluten per day, mostly in the form of bread, pasta and baked goods  5  . For example, a piece of bread contains about 6-8 g of gluten - while in celiac disease doses of 50 mg (ie 0.05 g) can cause allergies.

However, it is important to separate the harms of gluten-free foods from the harms of gluten itself. Almost all baked wheat products have a high glycemic index, and ultra-processed foods containing gluten are high in saturated fat and salt.

A gluten-rich diet is harmful in itself because it contains mostly processed foods with minimal amounts of whole grains, vegetables, fiber, vitamins and minerals.

Animal studies have shown that when they follow a diet with the same amount of calories, those who eat gluten gain more weight. They had a different composition of adipose tissue - according to the results, gluten affected the metabolic processes of oxygen  6  .

It seems to people that eating a lot of gluten on a physical level develops the habit of associating satiety with a feeling of "full" stomach.

Gluten is a protein component of cereals. It is estimated that 0.2 to 6% of the population in different countries have problems with the inability to fully digest and assimilate this substance. Given that a gluten-rich diet in itself carries health risks (due to its high GI, abundance of saturated fat and salt).

How many times a day should you eat - and what should be...

How can an ectomorph gain weight and increase muscle mass?

How to make a homemade gainer? - Recipe with maltodextrin...