For decades, dietary recommendations for cardiovascular health and reduction of coronary heart disease such as  atherosclerosis have  been based on reducing the intake of saturated fats and  cholesterol  , limiting the consumption of eggs, lean meat, dairy products, etc.

The purpose of this article is to review the scientific literature on these recommendations. In addition, the role of refined carbohydrates and hydrogenated fats and the role they may play in cardiovascular disease (CVD) will be analyzed.

On  Cholesterol  is the main sterol of the human body. Steriles are a type of natural fat present in the body and are found in our body as part of cell membranes, lipoproteins, bile acids and steroid hormones.

The liver is the main organ that produces  cholesterol  , like other important organs in production, such as the intestines, adrenal cortex, testicles and ovaries.

On the other hand, saturated fats consist of saturated fatty acids. This type of fat is present in cell membranes, acting as a cellular defense against free radicals, helping to fix calcium from food in the bones, synthesizing sex hormones, improving the immune system and helping the brain metabolize omega 3 fatty acids.

Which in theory accelerates the development of atherosclerosis and its complications, but  individual reactions to cholesterol and saturated fatty acids suggest that there are genetic and physiological factors in humans that, despite diet, homeostatic and regulatory mechanisms, maintain a relatively constant level of plasma cholesterol.

It should be noted that the rates of obesity, hypertension, diabetes and other CVD-related diseases continue to increase among the population of Western countries. Countries like the United States have gone from about 5-10% of their  population with obesity  to about 30% in just 30 years, and in Europe the Mediterranean countries show the highest rate of obesity with a gradual increase (as the biggest problem for children .

This article attempts to clarify what factors cause an increase in people with CVD by analyzing how the intake of saturated fats,  cholesterol  , refined carbohydrates and hydrogenated fats affects cardiovascular health.

"Individual responses to cholesterol and saturated fatty acids suggest that there are genetic and physiological factors in humans that maintain a relatively constant level of plasma cholesterol, regardless of diet, homeostatic and regulatory mechanisms."

Predicting CVD from high LDL or low HDL can be misleading. Currently, its measurement is performed using the formula of Friedewald et al., Where HDL, triglycerides and total  cholesterol   are measured and LDL is calculated based on them, a formula that in some cases may be inaccurate.

A study of 136,905 patients with CVD showed predominantly low LDL levels, so it should be noted that  high LDL levels are not a prerequisite for CVD .

In predicting CVD, the one that measures the level of metabolic imbalance may be more useful, and the type of  cholesterol  that can help with such prediction is LDL-P, i. the number and size of the particles. which transports lipoprotein more than LDL-C (total LDL  cholesterol  ), which is usually the one calculated in the blood test.

As mentioned above,   plasma cholesterol levels are affected by cholesterol synthesis and it will then be assessed how it affects your food intake and whether there is a link between high cholesterol foods and plasma levels. 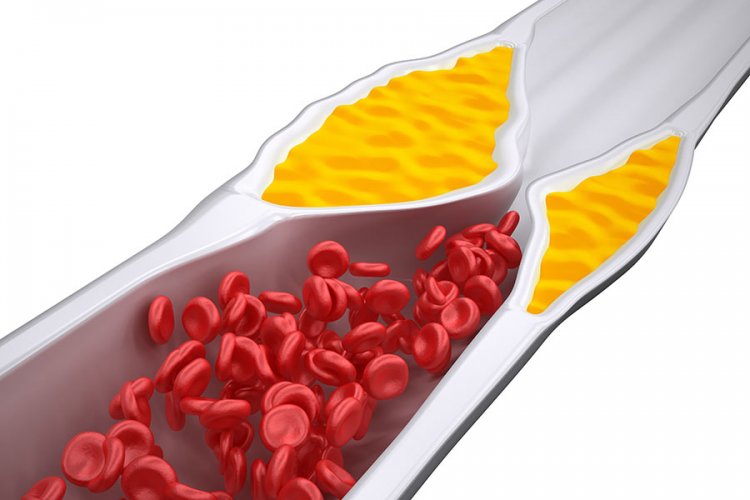 The general recommendations, based on the low consumption of foods high in  cholesterol  , have been applied worldwide for decades, in particular it is recommended not to take more than 300 mg. of  cholesterol  / day.

One of the organizers of this idea was Ancel Keys, an American physiologist, considered the great promoter of the Mediterranean diet. In particular, he conducted a study called "  Seven States",  where Keys and his colleagues noted that the incidence of CVD is much higher in countries whose lifestyle is characterized by high  cholesterol  and saturated fat.

In addition, the incidence of coronary heart disease is higher in northern European countries than in the south, concluding that there may be a protective factor in a diet low in saturated fat and  cholesterol  against cardiovascular disease.

However, this study received a lot of criticism, mainly due to the fact that there were data from 22 countries, but only 7 were included, curiously those that show a larger differential curve in favor of high saturated fat and cholesterol intake   and heart disease.

Despite the criticism received, the belief in the harmfulness of these types of fats and cholesterol was confirmed, despite the fact that Keys himself said:

A meta-analysis published in 2014 by researchers at the universities of Oxford, Cambridge and Harvard examined the links between saturated fat consumption and heart disease, and  after reviewing more than 80 articles involving more than 500,000 people, found no clear evidence that saturated fat intake caused by CVD .

They also said that when they did the tests, they found that saturated fats in dairy products were associated with a lower risk of heart disease. Another meta-analysis from 2015 shows 40 studies conducted between 1979 and 2013 that blamed dietary cholesterol intake as a cause of CVD and identified shortcomings in their methodological rigor .

In fact, taking high  cholesterol  may not only not be harmful, but it may also be helpful in reducing cardiovascular risk in women. As for the elderly, there is no link between cholesterol intake   and mortality from coronary heart disease or mortality from any cause in people over the age of 70.

If you specifically analyze foods like eggs that are rich in saturated fatty acids and  cholesterol  , the results are astounding. There are several meta-analyzes that highlight the zero effect of this food on   plasma cholesterol levels , including the negative impact of eggs in cases of diabetes.

It is worth highlighting a study conducted on plasma  cholesterol  and its mechanisms of metabolic adaptation in an 88-year-old man who consumed 25 eggs per day, showing normal serum levels.

The link between egg consumption and CVD does not appear to exist on the basis of numerous studies published on their intake, or with daily consumption of one egg, or a diet rich in them.

The case of the egg began to spread to other foods rich in saturated fat and  cholesterol  . It should be noted that the consumption of saturated fats is not the same in all foods. Processed food and the addition of supplements can change the biological value of food.

Furthermore, the recommendation not to limit excessive intake of  cholesterol  or saturated fats does not mean to give freedom to the intake of foods high in refined carbohydrates, processed fats or, which would give other work, ignoring the origin of the food in question.

Kefir and its effects on productivity

What effect does pineapple juice have on men? Do I have to drink it every day?

How to quench your thirst? The best drinks for hot weather

What does a healthy lifestyle involve? Components and statistics...